Responsible management of the environment
+ -

The environmental management of processes

The commitment to responsible management of the environment is structured with Management leadership through:

Certified, In the process of obtaining certification

Naturgy identifies, records and analyses the environmental risks and events that have occurred in order to define, apply and disseminate preventive measures to reduce potential damage to the environment.

To do this, facilities with environmental risk are assessed using recognised standards as a reference.

The first element for management of environmental risks are self-protection plans, in which the most appropriate risks and responses are identified in light of potential accidents and emergency situations. In addition, there are global and uniform procedures and systems in the different businesses and geographies for reporting, classifying, monitoring and managing environmental events (Prosafety). This approach allows preventive action, since it not only focuses on accidents, but also records and manages environmental incidents, which do not generate significant damage but are a source of learning and prevention of major events.

1,192 participants received a total of 3,115 hours of training in 2018, with plan objectives being met by 183% and 117%, respectively. The % increase over planning is due to the activity in hours and participants carried out in Chile and not contemplated initially.

In 2018, Naturgy developed an Environmental Communication Plan to support the dissemination of knowledge and awareness on environmental issues and to promote a constructive dialogue with the different stakeholders.

The activities developed in 2018 included the following:

The company has continued to encourage corporate environmental volunteer actions targeted at promoting a positive attitude among employees and their families about the preservation of nature.

Naturgy continuously monitors environmental legislation to be aware in advance of the repercussion this has on its activity, to define its positioning and to adapt itself to new requirements. The company participates proactively in the processes of consultation and public information in the international, European and national context.

The company did not receive any significant sanctions (fines over Euros 60,000) for environmental breaches in 2018.

The environmental actions carried out in 2018 have reached a total of Euros 494 million (Euros 96 million in 2017), of which Euros 396 million correspond to environmental investments and Euros 98 million to expenses incurred in the environmental management of the facilities, excluding those resulting from the carbon market. Among the investments made, those corresponding to the new renewable generation projects (Euros 314 million), mainly wind and photovoltaic farms, stand out, which will contribute to reducing specific emissions of CO2 and other atmospheric pollutants.

The main strategic lines of action in terms of climate, to contribute to mitigating climate change and the energy transition, are:

Accordingly, Naturgy’s climate action is based on the following pillars:

For this, Naturgy has a specific tool, developed in Ms Excel and @ Risk, which allows it to estimate its exposure to risks, at an aggregate level and broken down by business, geography, technology and temporal scope (short, medium and long term). Thus, it estimates the impact of different climate change scenarios (IPCC) through physical, environmental, business and economics indicators. In addition, it means we can simulate impact assessment scenarios based on new products and services, etc. and the implementation of R&D&I actions.

In addition, Naturgy has a stochastic model that it developed itself, with Monte Carlo simulation, which allows us to determine the optimal abatement cost in the European Union to meet the GHG reduction targets by 2030.

With regard to managing the coverage of facilities regulated by the European Union Emissions Trading Directive during Phase III (2013–2020), Naturgy performs integral management of its emission rights portfolio in order to acquire 100% of emission rights equivalent to its output, given that the electricity sector has not been receiving free assignation since 1 January 2013. For this purpose, it actively participates both in the primary market, through auctions, and in the secondary market. In 2018, CO2 emissions affected by the laws governing the Emissions Trading System came to total of 9.1 million tonnes.

Management of climate change at Naturgy in figures

Emissions prevented in 2018 came to a total of 126.2 MtCO2, most of which (93%) resulted from the use of natural gas to replace other more carbon-intensive fossil fuels.

Emissions of methane per kilometre of gas transportation and distribution network totalled 9.4 tCO2eq/km. 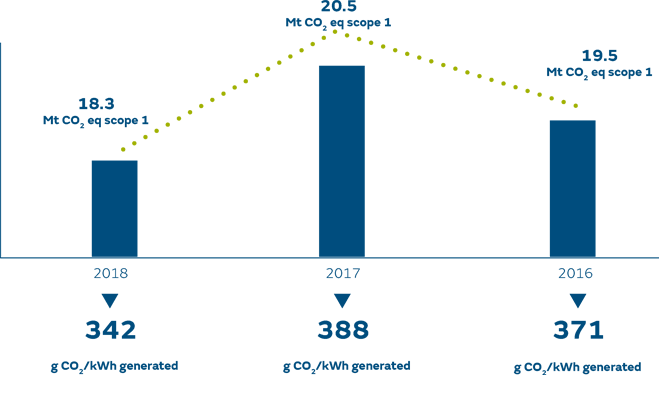 With reference to other pollutants, 0.06 tonnes of mercury, 0.01 tonnes of HCFC and 0.9 tonnes of freon R22 refrigerant were emitted./p>

The main achievements obtained in climate and air quality in 2018

The consumption of fuels and chemical products fell in 2018 owing to the lesser operation of coal-fired power stations. The fact that magnetite consumption has ceased should also be highlighted, owing to disinvestment in the Kangra coal mine in South Africa.

NB: 2016 and 2017 figures include the consumption data for Moldova, Kenya and South Africa, whereas 2018 does not.

Energy consumption outside the organisation(GWh)

NB: 2017 figures include the consumption data for South Africa, whereas 2018 does not.

Most water consumption at the Naturgy facilities is due to the operation of the electricity power stations, in particular to the evaporation of water in the cooling towers. In 2018, there was a significant decrease in the volume of water consumed, mainly due to lower activity at the coal-fired power stations.

Most of the water collected is returned to the environment, with the percentage consumed in 2018 standing at 3.4%. Depending on its origin, the main source of supply is the sea (97%), with freshwater accounting for a much smaller contribution.

Within the framework of the integrated management system, Naturgy develops management and control procedures aimed at minimising the waste that is disposed of in landfill, through prevention, reuse, recycling and/or energy recovery.

In 2018, generation of non-hazardous waste decreased significantly compared with 2017. Also highlighted is the reduction in waste from coal-fired power stations, in particular ashes, cinders and gypsum, owing to the lesser operation of these facilities.

Finally, special mention should be made of the actions undertaken to promote renewable gas. This energy vector can be produced from the conversion of surplus renewable energy or from the transformation of organic waste. Because it is carbon neutral, this gas reduces CO2 emissions (and can even be used as a carbon sink), preventing the negative environmental and social impacts caused by the waste from which it is produced and fostering economic activity in rural areas.

Generation and recycling of ashes (kt)

In 2018, Naturgy continued with the removal of polychlorinated biphenyls (PCB). There are currently 172 tonnes of dielectric oils to be removed, which have concentrations of PCB above 50 ppm.

The 2018 milestones in the circular economy are described below:

Naturgy is committed to preserving natural capital, biodiversity and cultural heritage in the areas around its facilities, with special attention paid to protected areas and species. For this purpose, based on the precautionary principle, prior environmental impact and archaeological studies are conducted as required for all projects, in order to reduce the negative impacts on the full life cycle. In addition, measures are set out to mitigate the impacts caused by facilities on the natural environment and cultural heritage, particularly with regard to those located in the area of influence of high environmental value and protected areas. In those cases in which it is not possible to completely avoid the impact, the required compensatory measures are introduced.

During the operating stage of facilities, the company applies strict operation control and risk management procedures (environmental emergency plans, drills, etc.) to prevent incidents before they occur or to minimise any damage.

The following table analyses the impacts on biodiversity that may be caused by the company’s operations:

For management of biodiversity, there is a specific working group that operates across the board in the company and which features participation from all businesses and geographies. Likewise, company employees are invited to participate in environmental volunteer programmes that encourage the development of individual attitudes and behaviour to respect and protection of the natural environment.

Naturgy’s business activities require the occupation of land, whether temporarily during the construction stage or permanently during the operation of facilities. The following table shows the total surface area of facilities located within or adjacent to areas of high biodiversity or protected natural spaces. In order to determine the facilities located adjacent to these types of spaces, consideration has been given not only to their physical limitations but also to a number of specific impact ratios according to type of facility. Consequently, the infrastructure is classified as interior (within areas of high biodiversity), adjacent (radius of impact within the protected space) or exterior when it is outside.

*According to the species catalogue of the International Union for the Conservation of Nature (IUCN red list).