The new Strategic Plan 2018-2022, unveiled in London on 28 June 2018, establishes the group's business model, which is focused on value creation.

Naturgy is focused on responding to its own industrial model, based on:

Treating the energy transition as an opportunity

Naturgy believes that natural gas and renewable energies will play a very important role in the transition to energies that produce lower CO2emissions, as needed to meetthe targets set in the 2015 Paris Agreement on climate change.

As a result, the following lines of action have been established:

Moreover, Naturgy's infrastructure assets will play a vital role over the next few years in the process of electrification and improvement of energy efficiency, supporting greater electrification and greater penetration by gas in countries where the company already operates.

Being a flexible, competitive company

Solid, tangible levers have been defined for achieving the efficiency goals set out in the Strategic Plan 2018-2022 :

Naturgy presented an efficiency plan and undertook to cut annual operating expenses by Euros 500 million by 2022.

The following key levers for digitalisation have been defined for 2022:

These projects will drive the Group's transformation via digitalisation.

Placing the customer at the centre of the model

Enhance our commitment to the customer by placing them at the centre of Naturgy's strategy based on:

The main objective of the new Strategic Plan 2018-2022 is to guide the company towards value creation and lay the foundations for the Group's new industrial model. Naturgy's commitment to value creation is underpinned by four basic pillars: simplicity and accountability, optimisation, discipline in investment, and shareholder remuneration.

In terms of corporate governance, a major change was the reduction in the number of members in the Board of Directors from 17 to 12 (the executive chairman, six proprietary directors and five independents). Internal governance rules will also be simplified to achieve a more efficient structure and to make decision-making more agile.

The organisation structure has been simplified into four business units (Gas & Power, Infrastructure EMEA, Infrastructure LatAm South and Infrastructure LatAm North), with leaner corporate functions in order to ensure that the businesses operate autonomously and with full responsibility for their results, enabling the parent company to focus on valueadded processes and on ensuring centralised oversight.

A new Opex & Capex Committee was created with the task of ensuring the execution of the company's efficiency plan and for fulfilling the discipline in capital expenditure envisaged in the Strategic Plan.

With these changes, Naturgy has simplified its corporate governance to streamline decision-making and redesigned its organisational structure to attribute greater autonomy and responsibility to the individual businesses.

Naturgy defines its strategic positioning on the basis of the following criteria:

A total of Euros 5.3 billion of expenditure in growth Capex have been identified, and Euros 300 million are expected to be realised through divestments in addition to those already performed.

Naturgy will also work to balance the weight of its businesses in its mix of activities and will be more ambitious to increase the contribution by regulated activities and by electricity. In the future, the company expects that at least 70% of its business will be linked to regulated activities (currently 52%), with half related to electricity (currently 40%). It also expects to increase exposure to services to about 10%, reinforcing its commitment to the customer.

Additionally, on the basis of developments in the markets where it operates and in linewith the assumptions and foundations of the new Strategic Plan 2018-2022, Naturgy reviewed the value of its assets, which resulted in a one-time impairment in the amount of Euros 4,851 million before taxes, booked in 2018. This impairment had no impact on shareholder remuneration and it will be accretive from 2019 because of the lower depreciation charge.

Financial strategy will focus on reducing Opex, optimising Capex and applying strict discipline in investments, pursuing organic development. Any optimisation will be submitted for the supervision of the new Opex and Capex committee.

Under the Strategic Plan 2018-2022 , the company will continue to optimise the businesses with additional efficiency measures, with the commitment to cut annual operating expenses by Euros 500 million in 2022. These efficiencies will be focused on an analysis of the company's non-core activities and on the assignment of the operational functions within each of the business units, all supported by the ongoing digitalisation processes.

Naturgy plans to cut group-level Capex by Euros 200 million per year with respect to the average in 2015-2017, while increasing the percentage of investment allocated to organic growth in comparison with previous years. In average terms, the goal is for 63% of capital expenditure to be allocated to growth in 2018-2022 vs. an average of 54% in 2015-2017.

Four golden rules were defined to ensure value creation and profitable growth in both organic and inorganic investments:

Applying these rules, Naturgy plans to invest Euros 8.4 billion over the next five years, of which Euros 5.3 billion will be allocated to growth, increasing the proportion of growth Capex to 63% of the total in the period:

Growth Capex by business for 2022

The company will increase the dividend charged to 2018 earnings by 30% to Euros 1.30 per share.

Under the Strategic Plan 2018-2022, Naturgy made a commitment to its shareholders to increase the cash dividend by at least 5% per year until the end of the period and to pay dividends in three instalments:

To reinforce the new shareholder remuneration policy, in the event that the company cannot find inorganic investments that meet the hurdle rate, it can allocate a maximum of Euros 2 billion to buying back own shares, capped at Euros 400 million per year.

The growth prospects for the individual businesses, as defined in the Strategic Plan 2018-2022 , are as follows:

The Strategic Plan 2018-2022 targets Ebitda of Euros 1.7 billion per year, with Capex amounting to Euros 2.7 billion in the period 2018-2022. This will be driven by organic growth and higher efficiency in exploiting assets. The goals and opportunities defined for each of the units in this business are as follows:

The Ebitda target for this business is around Euros 1.645 billion, with Capex in the period 2018-2022 totalling about Euros 2.310 billion. The goals and opportunities defined for each of the units in this business are as follows:

The Ebitda target for this business is around Euros 1.2 billion, with total Capex of about Euros 2.3 billion in the period 2018-2022. The goals and opportunities defined for each of the units in this business are as follows:

The Ebitda target for this business is around Euros 400 million, with Capex totalling about Euros 1 billion in the period 2018-2022. The goals and opportunities defined for each of the units in this business are as follows: 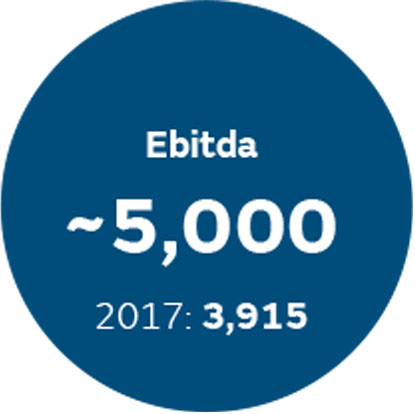 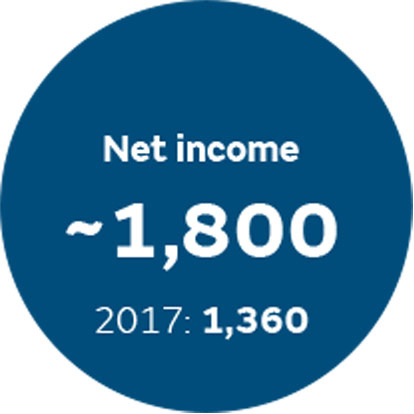 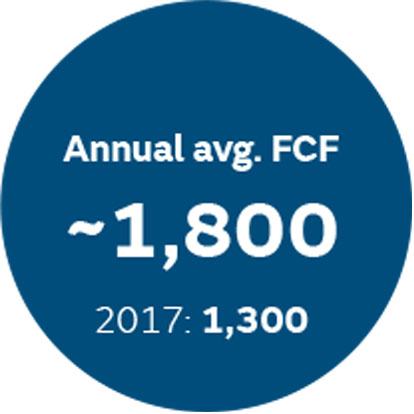 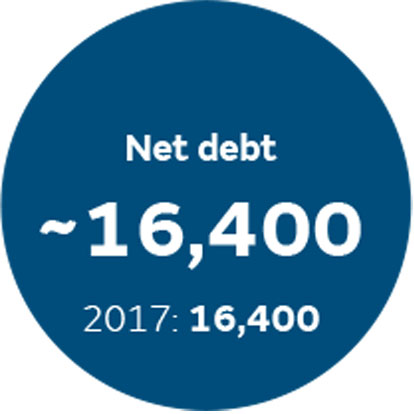 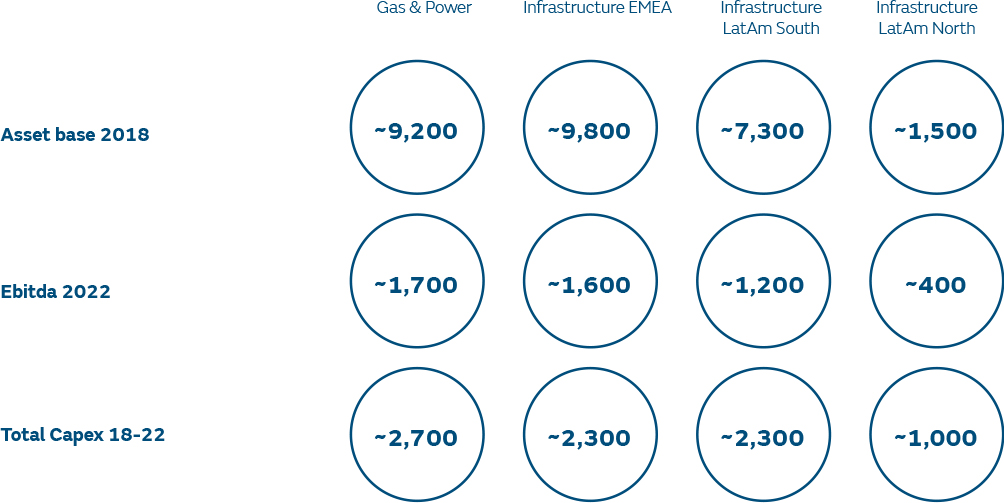 To support the business strategy, the finance strategy targets net debt at end-2022 at the same level as end-2017 (Euros 16.4 billion, per IFRS 16) as strong cash flow will make it possible to distribute dividends (Euros 6.9 billion) and allocate Euros 2 billion to share buybacks or inorganic growth opportunities.

Finance policy will focus on maintaining the rating and leverage while managing the debt structure to make it more effective. The debt structure will be diversified, prioritising access to capital markets and institutional funds, with at least 70% of debt at fixed cost while seeking "natural" hedges by ensuring that subsidiaries are funded in the currency in which they generate cash flows.